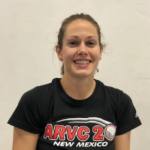 Born in Austin, Texas and raised in Albuquerque, New Mexico, Coach Brenna Freeze is currently employed with Lovelace UNM Rehabilitation Hospital as an Occupational Therapist. Coach Brenna started her volleyball career at La Cueva High School, playing all four year as a dominant middle blocker. While competing at the prep level, she used her height and athleticism, dominating the net through her offense attacks and defensive blocking. Coach Brenna received 1st team All-Metro (2007 & 2008), 1st team All-State (2008), and NM Gatorade Basketball Player of the Year (2008). Coach Brenna started her coaching with New Mexico Special Olympics in 2012, her special attention and detailed instruction has lead her and her team to win three gold medals at the NM State Summer Games (2015, 2016, and 2017). This is Coach Brenna 3rd year with ARVC, where she will be Lead Coach for the 12's Rebels Academy Group . She holds a USAV-IMPACT certification in volleyball coaching.

"Success comes from knowing that you did your best to become the best that you are capable of becoming." John Wooden