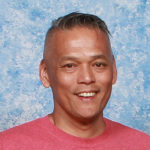 Born and raised in Honolulu, Hawaii. Coach Fred Ader spent most of his time in the United States Air Force, retiring here in Albuquerque, New Mexico.

Coach Fred has been involved with the sport for more than 28 years, competing overseas with the military and throughout the southwest of the United States.

He has been coaching for more 23 years and has been with ARVC when they first established in 1998. Under his leadership and knowledge for the game, his teams reached the USAV Girl's Junior National Championships for the last 8 years.

He currently holds USAV-CAP2 and AAU-PCI certifications in volleyball coaching.

"Defeat is just a phase; challenges are forever" - Fred