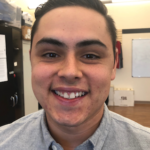 Grant Squier, from Albuquerque, NM is entering his second year of coaching for ARVC as an assistant coach on the 15 Regional 2 team.

Grant brings more than 10 years of playing and three years of coaching experience, including one collegiate playing year as a libero at Long Beach City College. After returning from Long Beach, Grant coached for Sandia High School and St. Mary’s Catholic School in Albuquerque.

When he is not coaching or playing, Grant works at Seasons 52.

“The most important games of volleyball will be played and won before you even step foot on the court.”