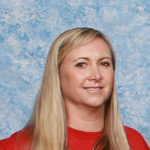 Coach Holly is a Albuquerque, NM native who played volleyball at Saint Pius X High School. She then continued her athletic career as a setter for the University of Oklahoma, and was a 4 time Academic All-American.

Following college, she played professionally for the NVA Tucson Flames from 1995-2002.

From 2002-2021 Holly has coached indoor and sand club volleyball for local clubs and instructed at college camps in the Albuquerque area.

She loves coaching, traveling, reading, and spending time with her husband Karl, and her daughter Logan.