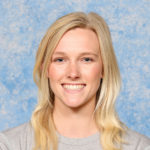 She has been playing volleyball for 11 years, including club experience for Lincoln Extreme Volleyball club and Illini Elite.

Kaylyn continued her playing career at Lincoln College in Lincoln, IL. She was a captain for her team for 3 years. In the 2018-2019 season, Kaylyn was awarded Female Champions of Character of the Year. In 2019, Kaylyn helped her team win their Conference Tournament where she received Player of the Conference Tournament.

After playing, Kaylyn joined the coaching ranks, including 3 years in club volleyball, and 2 years for grade school where she her 7th grade team won a state championship title.

This is Kaylyn's 2nd season as an assistant coach with ARVC.

Kaylyn has lived in Lincoln, Illinois for most of her life but recent moved to Albuquerque.

She is working at New Mexico Mutual as an Underwriting Intern.

Favorite quote: “If you can’t outplay them, outwork them.”