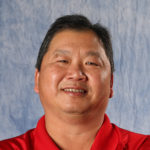 Born and raised in Vietnam, Coach Minh Tran moved to the United States in 1975 and now resides Albuquerque, NM.

Coach Minh Started his volleyball career playing volleyball at Eldorado High School from 1980-1984. He continued competing with the University of New Mexico's mens club and USAV volleyball teams, where he displayed his setting skills with precise accuracy and speed.

Coach Minh's coaching career started at Rio Grande High School. He later went on to coach at St. Pius High School and then instructed boys volleyball at Eldorado High School until 1990. During his tenure at St. Pius, Coach Minh assisted the Varsity team in capturing the 4A State Championships.

Coach Minh will be entering his 37th year of coaching. This will be his 4th year coaching with ARVC.

Minh is employed at Ray Flooring.