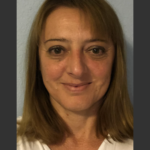 She started playing volleyball in the 7 grade at the division two level and then got promoted to division 1 in 9th grade for Atletica Luino, an 18 and under team.

After four years with Atletica Luino, Viviana continued on to play volleyball at Bocconi University in Milan, Italy.

Since then, she’s spent her time helping her son improve in volleyball and transition from middle blocker to setter.

Viviana is entering her 3rd season with ARVC.