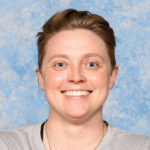 Born in El Paso, Texas and raised in Albuquerque, New Mexico. Coach Ashley is a well-known volleyball figure in the state of New Mexico. She started her volleyball career playing in middle and high school and went on to play at the collegiate level as a Middle Blocker at the University of New Mexico (UNM). Coach Ashley's skills and talent on the volleyball court earned her a spot on the USA A2 National team.

Her leadership and knowledge of the game is shown remarkably through her accolades. She was named the New Mexico 4A/5A Player of the Year and earned a spot on the All-Academic team. During her collegiate years, she was named several times as the Mountain West Conference (MWC) Player of the Week She also earned a spot on the MWC All-Academic team and MWC All-Conference team. Her talent was also recognized through the American Coaches Volleyball Association (AVCA), as she earned a spot on the AVCA All-West team and was an AVCA All-American Honorable Mention. While competing at the National level, Coach Ashley won the USAV National A2 Championships.

Her coaching background started during her collegiate years when she coached at the club and high school levels with New Mexico Juniors and La Cueva High School. After graduation from UNM, she was appointed as the student assistant to UNM Volleyball, and was later hired as an assistant coach at Eastern New Mexico University.

This is Coach Ashley's 5th year with ARVC.

She holds USAV-IMPACT and NFHS Level 1 certifications in volleyball coaching.