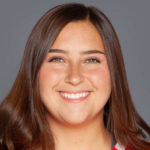 After her Sophomore year, she transferred to the University of New Mexico where she is finishing up her Senior Season for volleyball and completing her Bachelor's of Science in Biology Degree as well as a Minor in Chemistry.