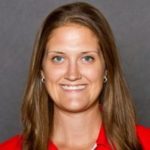 Lisa Beauchene is entering her third season with ARVC. She comes to ARVC after directing in 2015 and coaching and serving on the Board of Directors from 2007-2015 for New Mexico Juniors.

Lisa was an Assistant Volleyball Coach for the University of New Mexico from 2005-2007 and 2008-2015. While at UNM, she helped lead the Lobos to two NCAA Tournament appearances, coached seven AVCA All-Americans, two ESPN/Capital One Academic All-Americans and the team received two AVCA Team Academic awards. In 2012, she was a recipient of the AVCA Top 30 Under 30 award.

Prior to coaching at UNM, Lisa played four years at Sacramento State University where she was a four-time all-Big Sky Conference selection, including a three-time unanimous first team choice and the league's MVP during her senior season.

Following her playing career, Lisa was a student assistant at Sacramento State for the 2005 season and helped coach the team to a Big Sky title and NCAA berth. She continued her coaching experience with the Sacramento State Women's Club Volleyball Team who she coached to a 24-12 record, placing 23rd at the NIRSA championships and earning All NCCVL League honors for two players.

She earned her master’s in Sport Administration at UNM in 2007.