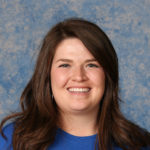 She started her playing career at ARVC as a 13-year old and then went to New Mexico Juniors where she became a standout outside hitter on a team that qualified for USAV Junior Olympic Nationals for three straight years.

Rachel started coaching as a summer camp counselor while a collegiate player at Fort Lewis College.

She is entering her 4th year of coaching for ARVC.

In addition to coaching, Rachel works as a Medicare health insurance agent.

Favorite quote: “Never let the fear of striking out keep you from playing the game.”